Minecraft just updated to version 1.19, have you downloaded it yet?? And here are the 10 best addons for Minecraft’s 1.19 update. Try now!

Addons are a terrific way for Minecraft: Bedrock and Pocket Edition players to improve their experience by downloading small files. After installation, these addons can be readily enabled from the main menu, providing a diverse range of content and gameplay adjustments.

It can be difficult to choose the best addons because there are so many to choose from. This is especially true now that Minecraft 1.19 has been launched, which has rendered a large number of addons obsolete while allowing new ones to rise to the top of the charts.

Zombie Apocalypse mod for minecraft is a survival addon for Minecraft, True Survival stands out as one of the most comprehensive. Players enter a world where the only hostile entities they’ll come across are zombies, who come in a variety of shapes and levels of decomposition. They can even carve hearts and lungs off of fallen zombies for new resources.

For a fantastic horror aesthetic, new animal gangs like rats and crows roam the area, and players can also encounter other survivors or a faction known as The Savage, who have abandoned their humanity and stolen anything they want.

Minecraft users will now have access to a wide range of new weaponry, including firearms, sentry guns, and explosives. Even with these weapons, gamers will face a difficult battle against the undead. This is especially relevant because players might become infected with the zombie virus and must create a vaccine to avoid becoming one of the shambling flesh-eaters.

The default animations in Minecraft are great, but they can be a little stiff. Kidsky’s Minecraft animated player mod is a fantastic upgrade.

Both with and without goods, the player models are substantially more articulated. Instead of looking to be gliding when moving their feet, character models move with a lot greater weight.

Players can even choose from a variety of animations depending on the weight of the weapon they’re using. There are a total of 43 independent animations available for gamers to enjoy in order to give their characters a lot more personality than the basic Minecraft animations.

Some Article by topic for Minecraft that Mcpe Addons want to refferal for you:

Vampires are a fascinating facet of macabre horror, and Vampire Craft brings this to life in Minecraft. Players can explore the globe, annihilating the night’s offspring or even becoming one themselves. Players will need to rely on blood-tinged Vampiric Potions to keep their hunger at bay once they’ve changed.

This addon provides a slew of other amazing creatures, including werewolves, so gamers won’t be limited to vampires alone. For their occult requirements, players can even make a ritual table block.

Getting lost in huge Minecraft worlds is a common occurrence for gamers. It would be really beneficial if players could leave a marker in the world and return to it at any time. Waypoints Mod allow players to create a waypoint map by combining maps, ender pearls, and compasses.

Waypoints mod can alter the game world by adding and removing waypoints that players can teleport to. It makes fast travel safe and convenient for Minecraft players, and it ensures that they don’t forget important landmarks that they’ve marked with a waypoint.

Forsaken Odyssey is an awesome mod for Minecraft survivalists that adds a lot of material to the wilderness. There are new mobs, bespoke constructions, and world-generation features in this update. This addition is a vast compilation of various addons concentrating on exploration and survival, all condensed into a single bundle.

For Minecraft players who pride themselves on survival or even Hardcore Mode gamers, the collection is a wonderful addition. It’s also feasible to use new bricks obtained around the game environment to rebuild the old ruins found in the woods. This addon also works with a variety of other addons, ensuring that players don’t break any other modifications they’ve done.

Blockz+ is one of the better alternatives for decorating in 10 best addons for Minecraft’s 1.19 update. Over 2,000 block types with up to 17 shape variations are included in this module. Without using the debug stick, players can squat and spin the blocks.

These blocks can be created out of almost any base material and come in a variety of innovative shapes, such as vertical slabs, vertical carpets, and diagonal iron bars. Sculk, which was introduced in Minecraft 1.19 as part of the deep dark biome, can even be used to make new blocks.

Ores Plus is a Minecraft addon for crafters that adds a dozen new ores to the game as well as new armor sets and tools. Eight different kinds of armor have unique abilities, such as the Elemental Cryo armor, which allows players to employ an effect similar to Frost Walker but with ice instead of water blocks.

Players can also make elemental tools and gear using gems and essences, and the many ores in the game can be reassembled into solid ornamental blocks. This addon is ideal for gamers that want to get more out of their underground ores.

The vanilla weapon system in Minecraft is severely deficient. There are only a few melee and ranged weapons to choose from. True Weapons, an addition that boosts combat items, can drastically improve this.

Players can make their own Japanese, Anglo-Saxon, and Germanic-styled armaments by constructing a new smithing table block. Machetes? Katanas? Axes with beards? All of them may be found in this addon. Several melee weapons and armor suites are available to aid players in their battle efforts.

The More Tools addon is a great option for players that desire a lot of variety in their tools and weaponry. This mod adds over 850 new tools, 35 different armor kinds, and 20 different ornamental blocks to Minecraft worlds. These items are all extremely well-balanced, ensuring that players do not have access to strong items too early in the game.

The More Tools Addon is also compatible with a number of other Survival Mode-friendly extensions, guaranteeing that players may fully immerse themselves in their survival worlds without experiencing any performance issues.

Serp Pokedrock – Pixelmon is one of Minecraft’s most popular mods. It’s perfectly among the 10 best addons for Minecraft’s 1.19 update in Bedrock Edition. SERP Pokedrock is a new Pokemon game for Bedrock platforms that puts its own take on the franchise.

Players can capture and battle Pokemon in the same way they would in real life, and they can even ride Pokemon as mounts. The original 151 Pokemon are currently available in Pokedrock, and they may be found in various biomes around the game. Pokedrock is one of the best Pokemon addons available today, as it allows players to visit Pokemon Centers for healing and face the sinister Team Rocket.

With 10 best addons for Minecraft’s 1.19 update (Zombie Apocalypse mod, New Play Animation, Ores Plus, True Weapons, The More Tools addon, Serp Pokedrock…) that Mcpe addons recommend in this article hope you can enjoy with your firend. Thank you following us.

More Mods for Minecraft 1.19 Update you can find in our app: 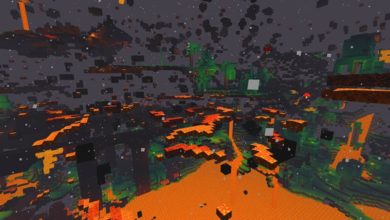