Welcome to EPCOT Center, a custom recreation of the Walt Disney World park from the 1980’s by Mickeynerd17 Productions presenting a Minecraft twist to the iconic Experimental Prototype Community Of Tomorrow.

Explore the wonders of the future as envisioned in the 1980’s Disney style in this permanent world’s fair. The park is divided into two sections, Future World and World Showcase, with the former being about future technologies and the latter about the unique and diverse cultures of our planet. Step into one of eight pavilions in Future World where you’ll learn about what the future holds in different themes, ranging from communications to transportation, under the sea and in outer space, and into the farthest reaches of imagination, the possibilities are endless! Come and explore today!

This map has been my personal endeavor for over 3 years. Ever since I discovered the past version of the theme park I love most, Epcot, as it looked in 1989 with all the original pavilions, I have always wanted to build my own version to enjoy and modify. Since starting this project in January 2018, I have slowly shaped a flat Minecraft world into the masterpiece you see today. Each pavilion was handcrafted with precision and care over the course of months to reflect their real-life counterparts while displaying a Minecraft flair that lives up to a quality experience any guest would expect. Now, I want to share my hard work with the world, so everyone can experience the EPCOT Center of the past, and enjoy the promise of a bright future!

Thanks for checking out my map, and welcome to the 21st century!

As part of the Sights and Sounds update, Future World now features in-park music featuring such classics as Tomorrow’s Child and One Little Spark among others. Each of the ten kiosks around Future World will activate the music if it’s not already playing, and each track will continue to loop even when your out of range! If you want to explore the park with no sound, simply turn the sound volume down in player settings. 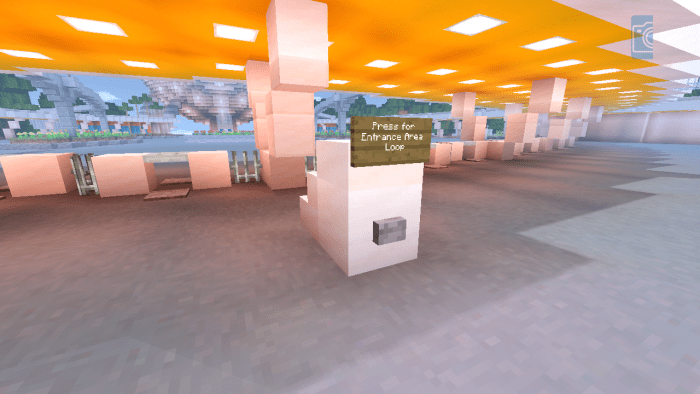 (NOTE: this system is very new, so there are some known issues. Tracks may not start up automatically or when the button is pressed. Please give it some time because it’s still in a previous track and will restart eventually. Tracks will also cut out in the middle of the song occasionally due to the song length being larger than the discs length. If there are any other issues, please leave a comment so I can release a hotfix if necessary. Thank you!) 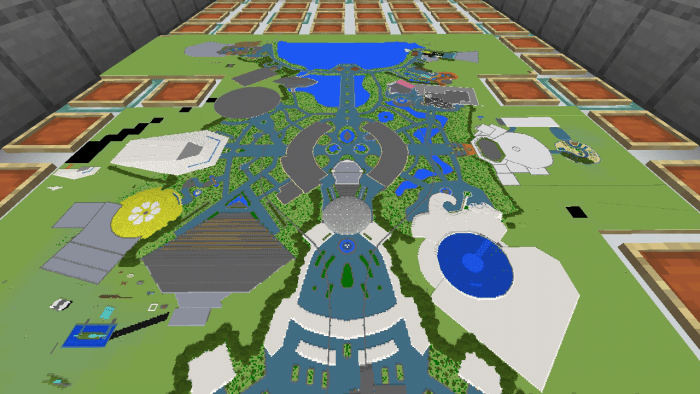 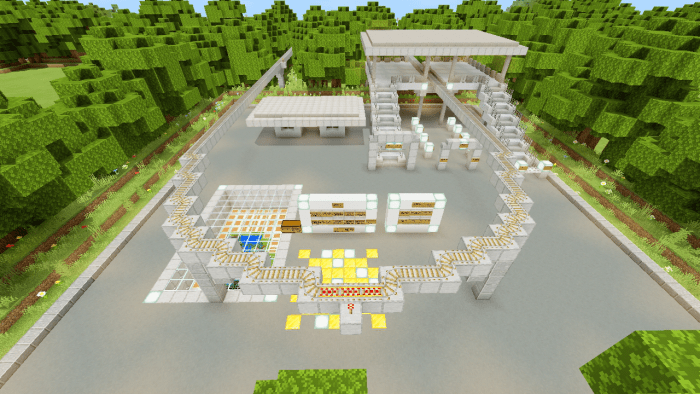 Parking Lots B and D, and parking tram station: 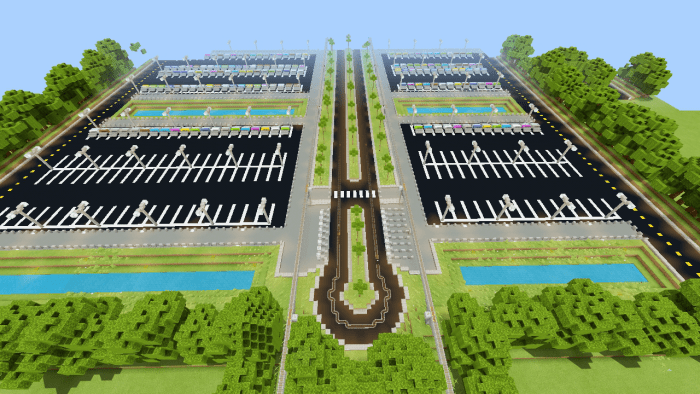 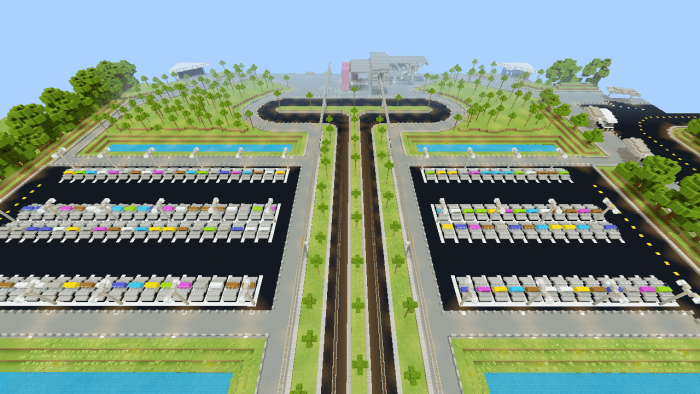 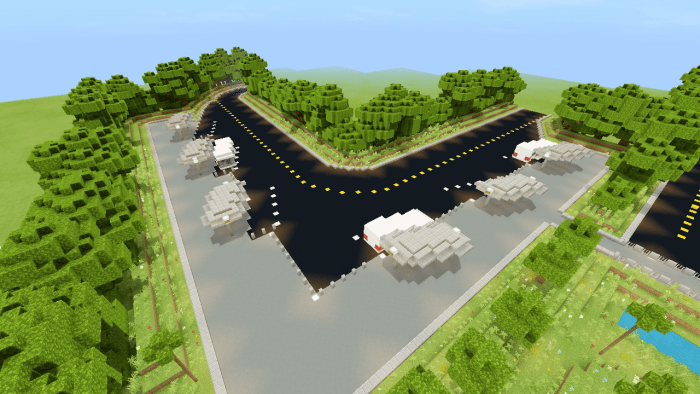 Photos of the pavilions: 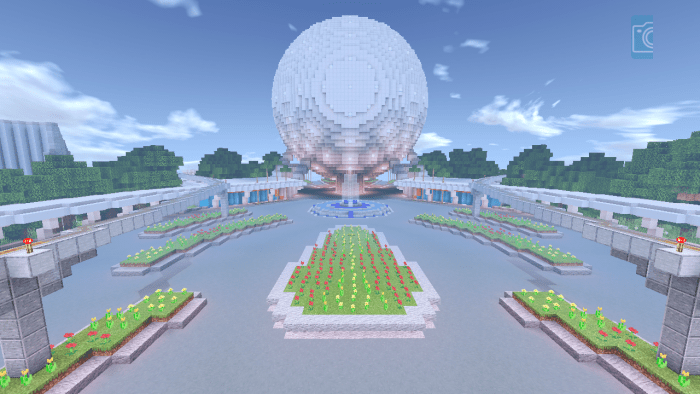 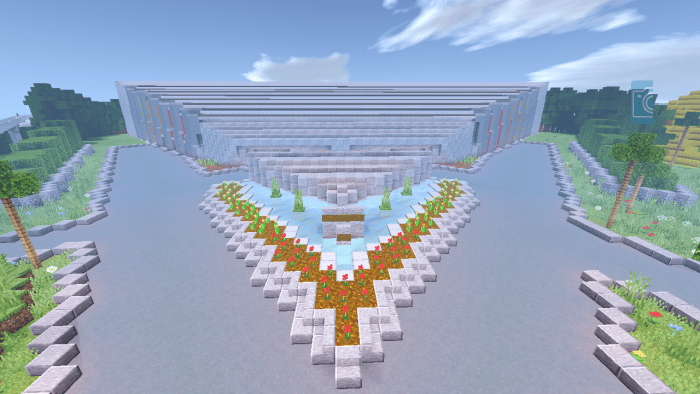 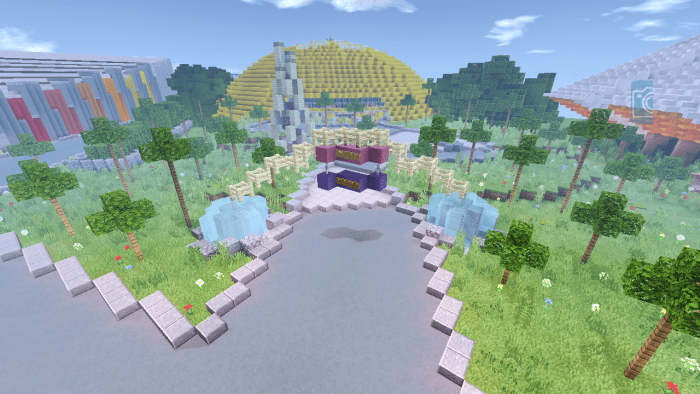 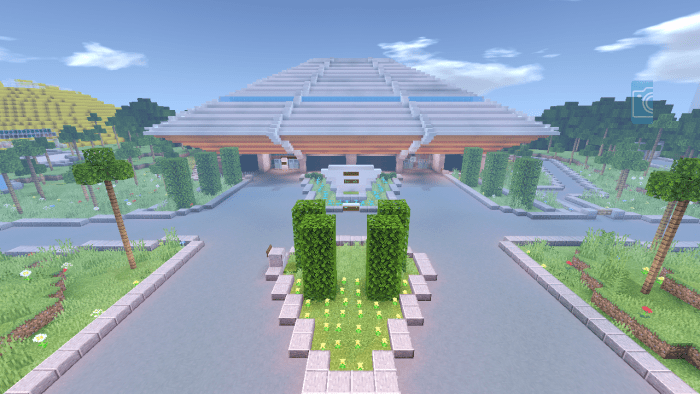 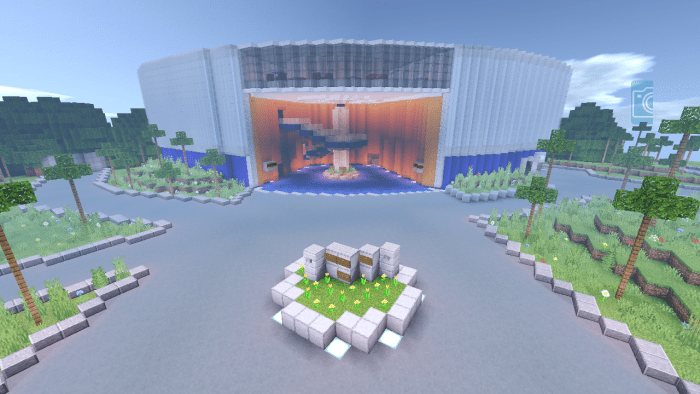 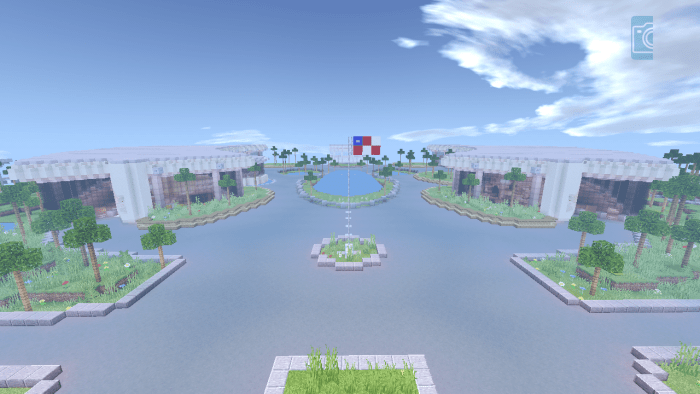 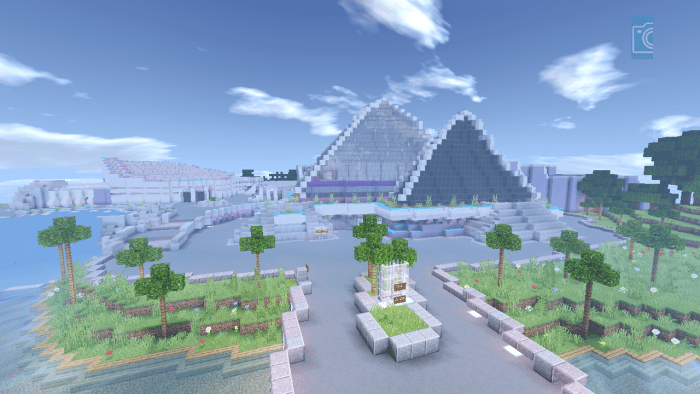 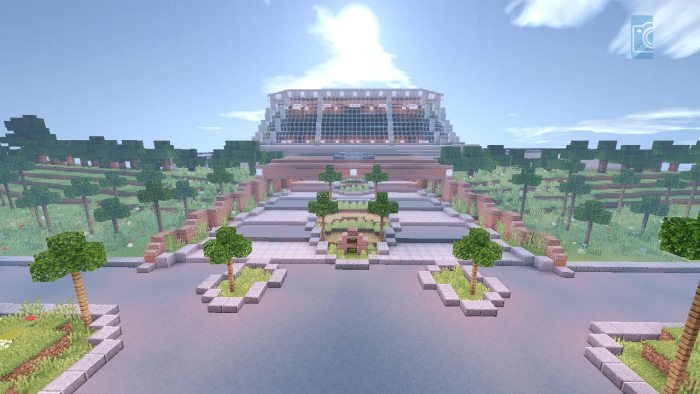 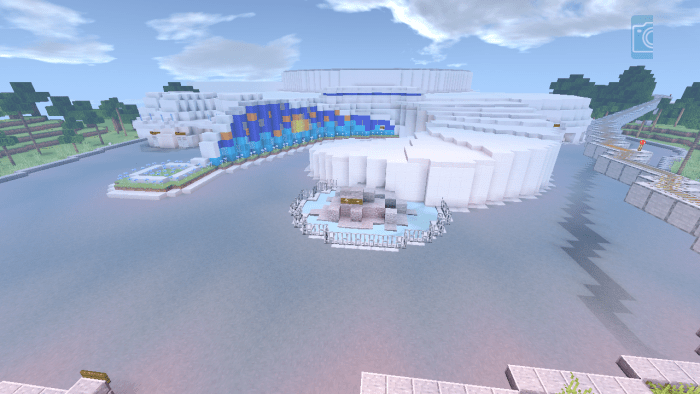 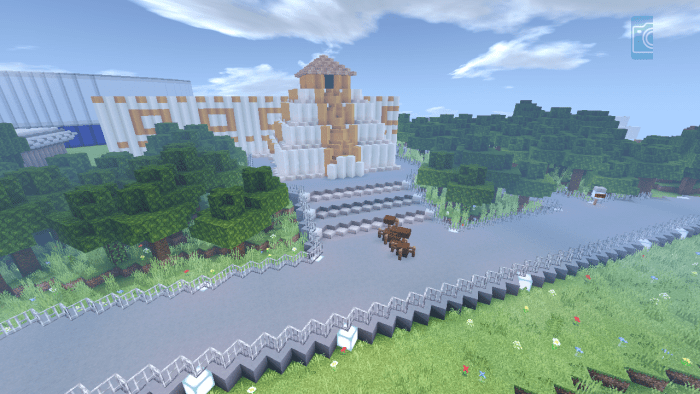 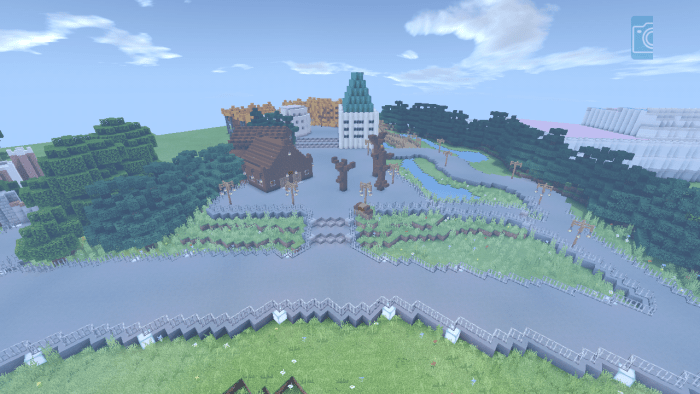 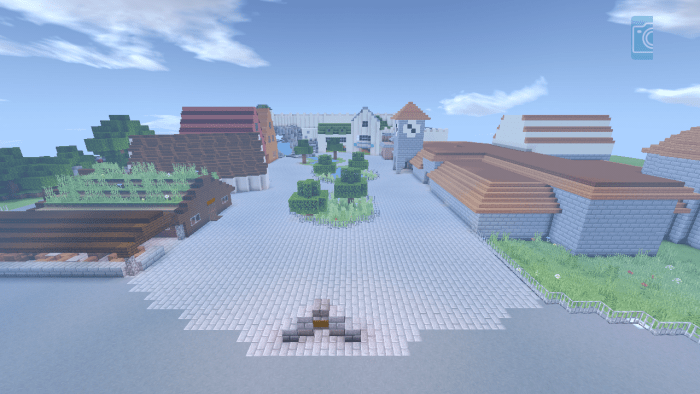 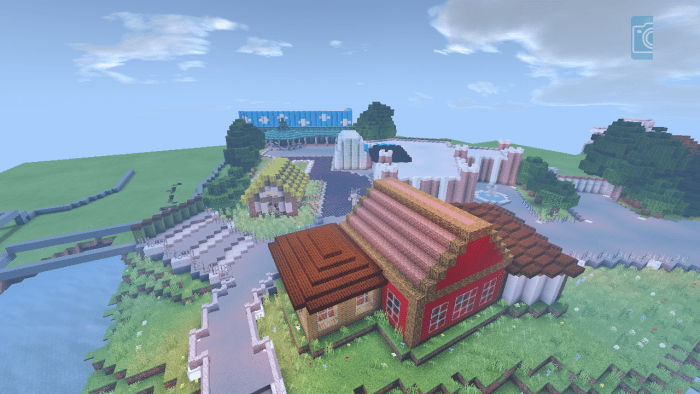 V11: The Sights and Sounds Update

Rebuilt Horizons from the ground up with improved building techniques and intense attention to detail. It’s now the most accurate pavilion in the map.

Added United Kingdom featuring a massive gift shop, tea shop, the Rose and Crown pub, and Thames River Expeditions, which is a scenic boat ride through miniatures of England’s landscape and landmarks.

Refurbished the LAND with an improved entrance, updates to The Good Turn, and a refresh of the Kitchen Kabaret holding room.

Man, 10 versions, what a milestone! To celebrate, there are some serious updates in this version!

Thanks for 4 months of patience! We have new developments on the Horizon for V11.

Transformed Future World pathways and added landscaping and palm trees to increase realism and to make the park more beautiful.

Enhanced a scene in Imagination to better reflect the real life version.

Revamped queue for Spaceship Earth, adding new planters along the sides of the building.

Began construction on Wonders of Life, to be finished in a future version.

Plus general upkeep and improvements to all pavilions.

Apparently there was an issue with downloading from the MCPEDL app that required me to reupload the map. This hopefully should fix it

Three months of waiting is finally going to pay off. Thank you for your patience!

Canada: “From a Northwest Indian Village to a 19th century French chateau and the winding, narrow streets of Quebec City, the remarkable diversity of Canadian cultures and the awesome majesty of the wilderness are captured in the Canada pavilion.” Beautifully created in Minecraft, it features shops and the O’ Canada CircleVision film.

Mexico: “Within the majestic pyramid of the Mexico pavilion lie the relics of lost civilizations together with the bold new emblems of a country moving proudly into it’s future. You’ll enter a lakeside village plaza complete with colorful shops and a restaurant featuring the famed cuisine ofe Mexico City’s incomparable San Angel Inn.”

Handcrafted in Minecraft, this pavilion features shops and a restaurant. El Rio Di Tiempo takes you on a cruise through Mexico’s rich heritage.

Port of Entry added, including World Traveler and the World Showcase preview Center.

Communicore is heavily redone, including restructuring and expansion of the buildings. Added more exhibits and a second restaurant. Moved the computer revue across the plaza and renamed it Backstage Magic. New Energy Exchange added. Expanded Centorium.

Phase 3 of the map is now in progress! We are officially announcing:

Yes! It’s what you’ve been waiting for forever, and it’s finally happening! The world showcase project has begun starting with a new Odyssey Restaurant. New lake has been installed with the pedestrian bridge and Port of Entry opening in the next version.

Stay tuned for some big updates! 🙂

Rebuilt Energy from the ground up featuring new scenes to better convey the message of the pavilion and currently has the most detailed scene I’ve built yet! I promise Energy Exchange will return soon….

Redid the roofs of Camera Center and Gateway Gifts plus added new paint.

Added palm trees and more foliage around the park to give it more life.

General refresh of all pavilions to keep up with Minecraft updates.

BIG plans are coming for Version 7, so stay tuned! Have a magical day!

Version 5 is finally out!! Extremely sorry for the long wait, but you’ll love what’s in store!

Rebuilt Land, Seas, and Motion from the ground up with better building techniques to better portray the message of each pavilion

Refreshed the center of the park to make it more green and natural, while still keeping the uniformity of the park

Minor updates to remaining pavilions to keep up with Minecraft updates

Added more places to eat in the park.

Redid some paths to make the park more open

Added barrier blocks to all fences and queues

Minor updates to all pavilions

Minor updates to all pavilions

New color schemes on some pavilions

If the .Mcworld file does not work, here are the steps to play.