The much-anticipated sequel to our biggest addon yet, foods plus is here! Foods plus 2 is a complete overhaul of the original, featuring tons of new foods, mobs, crops, blocks, and more. Additionally, this Foods Plus 2 is also compatible with most other addons, and it’s survival friendly as well.

If you’re a fan of the original foods plus addon, you’ll most likely like this one too.

This add-on comes with tons of new foods to mess around with! With more being added in the future.

Overview of the foods

Much like the original this version, contains different varieties of food from both fiction and real life.

All of the foods can be gained either from survival or creative mode, here is a short overview of some of the foods featured in this mod.

These guys can be crafted on a crafting bench, then you can roast them over a campfire.

Pies have to be crafted and then baked! They provide a lot of saturation

All the fruit and veggies can be found in the “crops” section of the creative menu. These foods are grown from the various crops featured in this Foods Plus 2 addon.

The Foods Plus 2 mod comes with some neat crops! They all have a Semi-Vanilla look to theme and range from simple 2D crops to 3D ones as well! And best of all these new crops don’t require a block-geo fixer to work.

The various seeds can be gained by fishing

Each crop has 4 different stages, similarly to vanilla crops, once they are fully grown they typically change to a darker color and are bigger

Trees! Everybody’s favorite plant, these guys are grown from saplings and can also grow fruit as well. Here’s a simple overview of the new trees featured in this addon.

You can harvest their leaves and turn them into maple syrup on the crafting table. Additionally, you can also craft some new planks from their logs as well.

The logs can be crafted into red planks

They can also be cut down and turned into pink planks

These trees, come in many different sizes, they can be planted using saplings and will grow coco-nuts too.

Their logs can also be turned into a neat tropical brown color, also note that due to the sheer size of the palm trees, when you place their sapling and the tree grows there’s a chance it can destroy some of the nearby blocks, so make sure to place these in the wide open field to avoid any damage

This Foods Plus 2 also features some new mobs! At the moment they are mostly for aesthetics, however, more uses will be added in the future.

These are aesthetic mobs, meaning that they are mostly just for looks.

They can also be tied to a lead

They can be used to build new structures and other things

Before using this Foods Plus 2 addon, be sure to enable both Holiday Creator Feature and Custom biomes

Other ways to get items

You can get the items by using commands. Example: /give @s foodsplus2:

Get Foods Plus 2 here

Some addons Minecraft PE you can check in Mcpeaddons.com: 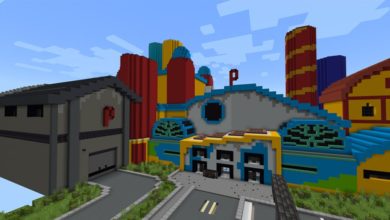